Klaus Iohannis, the Romanian President, to launch his book about the European Union for the Romanian readers in New York

Romanian President Klaus Iohannis’ third book, EU.RO – Europe, an Open Dialogue, published by Curtea Veche Publishing, will have its first international launch in New York on September 26th 2019. The book is a guide that presents a synthetic history of the European Union, of the institutions that define it, of its values and the main challenges that it currently faces. Furthermore, the book shines a light on the positive aspects that Romania has been benefitting from since it adhered to the European project.

President Iohannis will be visiting New York to attend the 74th session of the UN General Assembly. 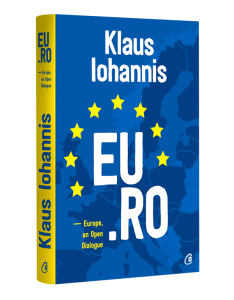 EU.RO – Europe, an Open Dialogue is an invitation to debate, analysis and sharing knowledge, and its main goal is to supply readers with the information they need in order to become truly knowledgeable European citizens and with the tools that will help them shape a coherent opinion about the European Union and its future.

President Klaus Iohannis’ book is a necessary gesture in the year Romania took over the presidency of the Council of the EU, but also in the context of a Europe determined to become incresingly aware of its strategic roles it plays, as a result of the turmoil that endagers its ideals of unity right from within.

Although everyone has a general grasp of what the European Union is, the book fills the needs for a structured, balanced and concise guide that should offer accesible answers to a broad spectrum of questions. And that should also tackle everything from the simplest historical notions about the Union, to the most problematic aspects that the implementation of its ideals poses.

“This basic conviction is what motivated me to write a book that centers on accessibly presenting the main mechanisms, values and political themes relevant to the European construct. My intention was, from the start, to offer a non-specialist reader concise explanations and answers to essential, sensitive questions that concern a great many citizens and that may generate confusion. The questions I have tried to answer in this book are quite diverse, but they all spring from our historic right to belong to the European Community and conclude with the way we see the future of our presence in the EU in the following years. These questions and answers also stem from the conviction that it is the duty of politicians to inform citizens about the way political mechanisms work. And about the great themes that are today at the forefront of public opinion in the entire world”, says Klaus Iohannis in the introduction of the book.

The historic solution that was meant to prevent catastrophic destruction similar to the one brought on by World War II has been proving its validity for almost seven decades now. In these difficult times, Klaus Iohannis illustrates the values that define the European Union and which have led to the longest span of peacetime the continent has ever known, the importance of the Eastern Flank, but also the meaning of Romania’s adherence to the Union, advocating for accountability and civic duty. Therefore, the book aims to encourage a better understanding of the European project by citizens. And it does it by presenting various themes and key concepts of European policy, but also through firsthand accounts, arguments and explanations concerning the Union and its roles.

EU.RO – Europe, an Open Dialogue by Klaus Iohannis will be available for purchase at the event venue. The book is also available in English.

You can read an excerpt from the book here: http://bit.ly/2m3HtaK